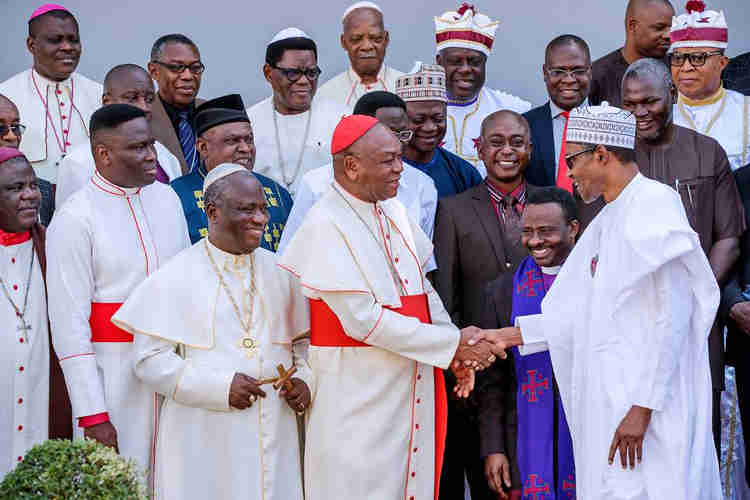 The United Kingdom All-Party Parliamentary Group on International Religious Freedom or Belief (a group made up of British parliamentarians) in its report, said that Christians are being targeted because of their faith in Nigeria.

However President Buhari’s spokesperson, Garba Shehu in a statement released on behalf of the Presidency said Boko Haram are targeting Christians in their attacks because they know it drives forward religious and land tensions already existent in the country.

He also insisted that the Buhari-led administration is increasing efforts “to fully defeat and finally finish Boko Haram” and has stopped seeking to negotiate for those held captive by the insurgents.

The statement reads in full;

The President and Government of Nigeria wish to thank members of the United Kingdom All-Party Parliamentary Group on International Religious Freedom or Belief for their report, launched a few days ago.

Although it is difficult reading, the statement also acknowledges the importance of accurate, unbiased, depoliticised and truthful information when it comes to understanding the realities and addressing the challenges for those of faith in Nigeria. In this regard when uncritical attention is afforded to critics with dubious intentions, it only becomes harder for both the government and people of Nigeria to engage in constructive dialogue to resolve our differences, and uphold what is enshrined in our Constitution and laws: that everyone has the right to freedom of thought, conscience and religion.

It is clear for all to see that there have, for generations in Nigeria, been tensions between our major religions, Christianity and Islam – and between herders and farmers – both for access to ever-decreasing arable and farmland due to a rapidly rising population, temperatures and desertification through global warming.

Exacerbating those tensions, our nation has also been in recent times and focused within the northern states – subject to vicious and criminal attacks by the terror group Boko Haram.

In concert with our American and British allies, Nigeria’s military have pushed back the terrorists and largely reduced their capacity over the last five years compared to the previous decade.

Boko Haram have targeted Christians and Churches specifically because they know it drives forward religious and land tensions already existent in the country. Similarly, they attack mosques and Muslims in order to issue the threat: radicalise, or become targets yourselves.

In the months and years ahead, our President who is Muslim and our Vice President who is an evangelical Christian pastor are irrevocably committed to addressing these multiple and long-term challenges for today’s and future generations. These include:
– Continuing and increasing Nigeria’s efforts alongside our allies to fully defeat and finally finish Boko Haram, in order to bring security to the north of the country.

– Continuing to seek, negotiate for, and secure the return of all those held hostage and in captivity by the terrorists, regardless of the religious faith or belief.

– Uniting our nation through dialogue organised around respect for difference in religion. Such a programme is already underway under the leadership of the Vice President, Pastor Yemi Osinbajo.

– Addressing, through Joint Federal and State Governments programmes, access to arable farmland – with land mandated both for farmers and herders. The federal government will issue detailed measures regarding this plan and its rollout in the coming weeks.

– Countering fake news – particularly on social and digital media – by working with the non-partisan stakeholder community, the National Broadcasting Commission and social media platforms themselves, to address the proliferation of false and inflammatory commentary.

The President and Government have and will at all times work with those – both within and without Nigeria – with a concern for the rights to freedom of thought, conscience and religion.

In this regard, we look forward to welcoming members of the All-Party Parliamentary Group to our country to see for themselves the work that is going on to promote these fundamental rights of our citizens. (LIB)