The Honourable member representing Irepodun, Olorunda, Orolu and Osogbo federal constituency, Olubukola Oyewo has stated that reelection of Governor Gboyega Oyetola for another term will be easy because of his “sterling performance”.

Oyewo, who spoke at his constituency relations office in Osogbo, on Saturday, dispelled reports of crisis within the All Progressives Congress in the state, adding that both Oyetola and his predecessor, Ogbeni Rauf Aregbesola remain party leaders and best of friends.

The lawmaker also used the avenue to give his mid term report as a member of the Green Chambers, stating that he has been able to better the lives of his constituents.

Oyewo said, “the achievements of Governor Oyetola in all sectors are enough to get him reelected. No local government has been left out by him. He has been able to change narratives and bring the State back on track. Sometimes, I do get amazed on how he’s doing it financially. Despite meager allocation, he’s paying salaries regularly, paying pensions and also doing massive projects.

Apart from that, let’s talk about infrastructures. Oyetola has done wonderfully well in that sector. For example, in my constituency, several road projects have been initiated and completed. Go to Alekuwodo, Ona Baba is ongoing, despite being an inherited project. The Osogbo-Iragbiji road is completed and very soon, Osogbo-Ogbomoso road, which has been a major issue for people from my hometown of Ifon-Osun will be taken over by the State government.

“Just yesterday, I went to the site of the ongoing Olaiya Iconic Flyover and I’m surprised by the speed at which the project is going. I believe very soon, it’ll be completed. In the area of health, all wards in Osun now have better facilities. This is remarkable. I believe with this, Osun people will massively vote Oyetola for another term.” The lawmaker said.

Speaking further, Oyewo said his two years at the National Assembly has brought succor to the people. He said he has sponsored “several productive motions” on the floor of the Chambers.

The lawmaker said, “Within my first year of his tenure in office, I made remarkable achievement and recorded laudable successive programmes that have benefited all and sundry in my constituency. It started with the submission of a motion to the House with regards to the abandonment of the Osogbo- Ilobu- Ifon- Oyo boundary road which connects Osun state to Oyo State and other neighbouring states like Kwara. I was concerned that owing to its abandonment, the road which is of economic importance to both Osun and Oyo States has been cut in many major places and there can be no better description of hell than what the residents of Osogbo, Agunbelewo, Okinni, Ilobu, Erin-Osun, Ifon go through on a daily basis. Few days after the submission of the motion, the contractor immediately returned to the site. Rehabilitation works was done.

“Furthermore, owing to the devastating effect of flooding in my constituency due to continuous downpour of rain that ravaged many properties, including houses, shops, and vehicles which consequently shut down economic activities of the affected areas. On Thursday, 3rd of October, 2019, I moved on the floor of the House, a motion of urgent need to address these problems and to provide government support to persons and areas affected with flooding. Many of the affected victims were documented. Recently the officials of the appropriate Ministry were in our constituency to ascertain the level of the damage done by the flood, and areas which reliefs can be granted to the victims.

Oyewo added that several federal projects were attracted while over 700 persons have been empowered with one still or the other and start-up funds provided. 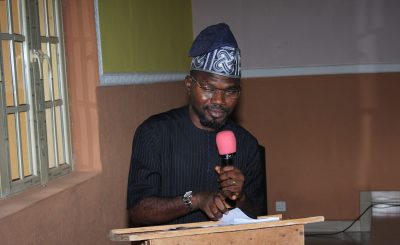