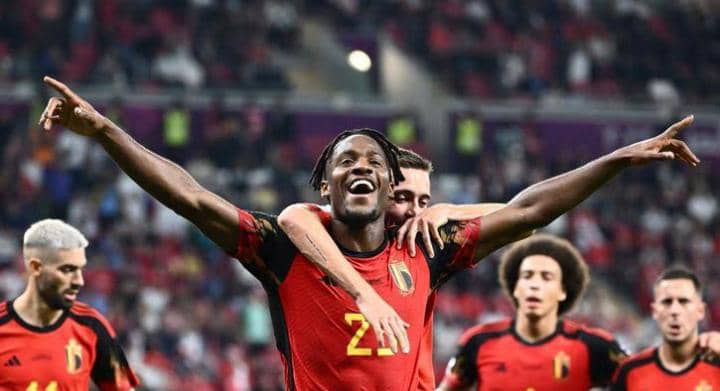 Michy Batshuayi steered Belgium to an unconvincing 1-0 victory over Canada in their opening game of the 2022 World Cup campaign.

Playing in just their second ever World Cup finals, Canada missed a golden opportunity to take an early lead, as Alphonso Davies had a penalty saved

And Batshuayi took full advantage just before half-time as he fired in the only goal of the game, sealing the Red Devils a narrow Group F win in Qatar.

Canada lost all three of their games without scoring in their only other World Cup finals appearance in 1986, and their wait for a first point and first goal goes on into their next game against Croatia on Sunday.

Canada were presented with a glorious chance to take the lead on 10 minutes as a Taylor Buchanan strike hit the arm of Yannick Carrasco in the box, but Davies saw his tame effort saved by Thibaut Courtois.

The North American side continued their dominance in the first half, with an ageing Belgian backline creaking time and again in the face of waves of attack, but they somehow fell behind on 44 minutes.

A Toby Alderweireld punt upfield wasn’t dealt with by the Canada defence, and Batshuayi took full advantage as he brought the ball down in the box with one touch before lashing his second emphatically into the back of the net.

It said a lot about Belgium’s first-half performance that, despite taking the lead, Roberto Martinez still felt the need to make two changes at the break, throwing on Amadou Onana and Thomas Meunier for Youri Tielemans and Carrasco.

And the moves helped stemmed some of the Canada tide, as Belgium saw out an uncomfortable opening victory. They face Morocco next, with a win likely to take them through to the last-16.

The save from Davies’ early penalty proved to be the crucial moment for Belgium, as he kept calm and composed behind Belgium’s struggling defence. Courtois proved why he was arguably the best goalkeeper in the world.

This results means Belgium go top of Group F after their opening game, ahead of Croatia and Morocco who played out a goalless draw earlier in the day.