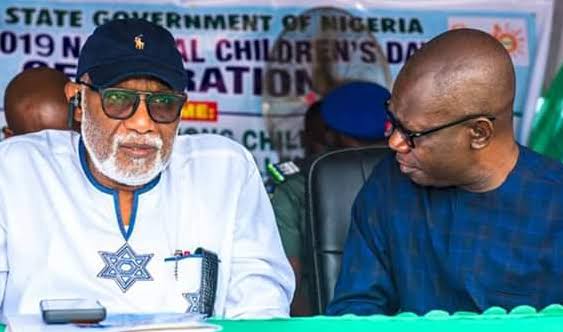 The Deputy Governor of Ondo State, Mr Agboola Ajayi, has to the Governor, Rotimi Akeredolu to follow the constitution and hand over power to him if the latter remains in self-isolation after 21 days. He said this was irrespective of their political differences.

Akeredolu was tested positive for COVID-19 earlier this week and had gone into self-isolation since.

However, the governor, through the state Commissioner for Information, Mr Donald Ojogo, on Friday, said the governor would not hand over to Ajayi, who had left the All Progressives Congress for People’s Democratic Party.

But reacting through his media aide, Mr Allen Sowore, on Saturday, Ajayi stated that he had been praying for the quick recovery of the governor but the constitution had to be followed.

Quoting Section 190(2) of the 1999 Constitution of the Federal Republic of Nigeria (as amended), Sowore said the constitution was apposite in “these circumstances,” stressing that the constitution must be obeyed after 21 days.

Sowore said, “Refusal and failure of Mr Governor to hand over the running of government to his deputy while in self-isolation and temporarily incapacitated would underscore his absolute disregard for the rule of law, spite on the people and a direct assault on the provisions of the constitution, which he swore to uphold.

“Not only that, his deliberate obstacles to ensure that government continues to run while he’s in self-isolation as a result of the fact that he has tested positive for COVID-19 puts lip service to his hypocritical war against the ravaging pandemic.

“Our candid advice is that the energy dissipated to pull down the office and person of the Deputy Governor should be channelled towards resolving the lingering crisis in the health sector, particularly the current strike embarked on by medical practitioners in the state in the middle of this pandemic.”