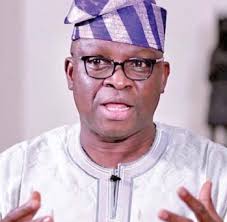 The Chairmen of 16 Local Governments in Ekiti State have instituted a case against the Attorney General of Federation and Minister of Justice, Abubakar Malami, SAN and all the 36 Governors of the country over the approval of $1bn from Excess Crude Account to fight terrorism in the North East.

In a suit filed by the their lawyer, Ola Olanipekun, marked FHC/ABJ/CS/1264/17, before the Abuja Division of the Federal High Court on Tuesday.

The plaintiffs prayed for an order of injunction restraining the Federal Government and the governors of the 36 states of the federation or their agents, from giving effect to “the appropriation and/or approval of appropriation of the sum of $1bn from the ECA of the Federation.

They argued that “a declaration that the 1st to 37 defendants’ appropriation and /or approval of appropriation of the sum of $1bn from the Excess Crude Account of the federation made at the National Economic Council meeting of December 12, 2017, without regard to the consent of the 38th defendant (the Revenue Mobilisation Allocation and Fiscal Commission), the plaintiffs (integral part of the local governments of the federation of Nigeria) and the due appropriation of the various states’ Houses of Assembly, is unconstitutional, unlawful, ultra vires, null, void ab initio and of no effect whatsoever”