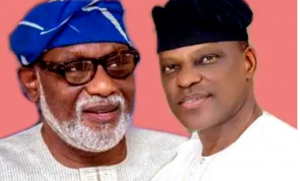 Following the split decision of the Supreme Court faulting the majority decision affirming the election of Ondo state governor, Rotimi Akeredolu, the Peoples Democratic Party, PDP, has again called on Yobe state governor, Mai Mala Buni to resign his caretaker chairmanship of the All Progressives Congress, APC, describing it as a violation of both the ruling party’s constitution and the 1999 constitution (as amended).

Although the apex court affirmed the governor’s election on Wednesday, a split decision read by Justice Mary Odili disagreed, arguing that Mai Mala Buni as a sitting governor was wrong to have presided over the process that produced Akeredolu as the candidate of the APC

Addressing a press conference at the party’s secretariat, national publicity secretary of the party, Kola Ologbondiyan, said the split decision of the apex court is a vindication of the party’s position.

“We insist that the process that led to the emergence of Gov. Akeredolu was and remains a violation of the APC constitution as well as the 1999 constitution. Section 183 of the 1999 constitution states that no governor should hold any other position in any capacity apart from the office of the governor. As you know, this was the major ground upon which we went to the Supreme Court,” he said

Meanwhile, the publicity scribe announced August 9, 2023, as the test-run date for the online registration of intending members of the PDP.

“We are happy that the Independent National Electoral Commission, INEC has come out to reveal that not less than one million Nigerians have so far participated in the continuous voter registration exercise of the commission.

While applauding INEC for the electronic registration of voters, Ologbondiyan urged Nigerians not to allow themselves to be discouraged from participating in a process that will bring about a credible government in 2023.

This is even as he accused the APC, of dissuading eligible voters from participating in the continuous voter registration exercise, even as he stressed that the ruling party is out to “write results, knowing that it cannot win in a fair, free and credible elections.”