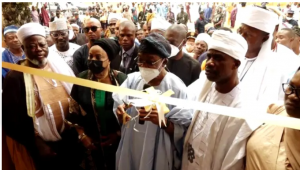 The Minister of Interior, Rauf Aregbesola, has frowned at the attitude of the younger generation of not making judicious use of the library towards enhancing their knowledge.

Aregbesola said that modern education system is practically impossible without the library, stressing that most youths had never been into a library before.

The former Governor of Osun State said this in Akure, Ondo State during the inauguration of a library built in Akure Muslim College by the children of the first indigenous Chief Imam of Akure, late AbdulSalaam Alake.

A book titled ‘Imam AbdulSalaam Alake: His Life and Legacies’ was also launched in honoured of the Imam, the Minister stated that the soul of education in any part of the world is a functioning library.

Aregbesola said that “Modern education system is practically impossible without library. Unfortunately our children don’t even know what a library is.

“Teachers only have enough time to introduce to students the subject, the actual learning will be drawn from the library resources and personal research”.

Education, both secular and religious is important to man. Religious education helps man to develop his personality and grow in the knowledge of and build his relationship with God.

“Religion without morality will lead to disaster. Religion with morality leads to spirituality. If you are spiritual, you cannot hate any other person regardless of what they do.”

Governor of Ondo State, Rotimi Akeredolu who was represented by the Secretary to the State Government, Princess Oladunni Odu disclosed that the state government had prioritized education in the state.

The daughter of the late Chief Imam, Dr. Munirat Ogunlayi, the library was built as part of efforts of the family to contribute to the development of the society.

Ogunlayi said “our dream is for the library to be a reference library in Ondo State if not in Nigeria.

“We’ll like to implore and work with the school and the Ministry of Education on proper management including deploying a professional Librarian to handle the proper management of the Library and instituting a system of conducting annual audit to ensure books and items are always in place.

She added that ” Accountability was a great quality of the industrious and hardworking sages we are all celebrating today they only eat from the sweats of their labor, and we look forward to the stakeholders at all levels working with us to sustain my father’s legacy when it comes to accountability.