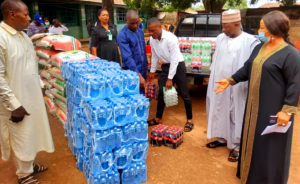 Governor Ifeanyi Ugwuanyi of Enugu State, in the spirit of Eid-el-Kabir, on Monday presented food items and undisclosed amount of cash to the Muslim Community in the state as part of his administration’s contributions towards the celebration.

Presenting the items, comprising bags of rice, cartons of water, fruit drinks, beverages and two big cows, on behalf of Gov. Ugwuanyi at the Enugu Central Mosque, Owerri Road, Enugu, the Commissioner for Special Duties, Mrs. Mabel Agbo, extended the governor’s warmest facilitations to the Muslim Community in Enugu State on the occasion of this year’s Eid-el-Kabir.

“We were sent by the Governor of Enugu State, His Excellency, Rt. Hon. Dr. Ifeanyichukwu Ugwuanyi to come and celebrate with our Muslim brothers and sisters here in Enugu.

“We are here to say Barka de Sallah to our brothers and sisters. We are one. The governor has been consistent in celebrating with you here. Tomorrow (Tuesday) is the D-Day. All of us are going to be here to wine and eat with you”, Mrs. Agbo said.

Receiving the Sallah gift items on behalf of the Muslim Community, the Sarkin Hausawa, Enugu State, Alhaji Abukakar Yusuf Sambo, expressed delight at Gov. Ugwuanyi’s “usual gesture”, stressing that “His Excellency (Ugwuanyi), as always, has remembered us this Sallah being our Eid-el-Kabir celebration, which is coming up tomorrow”.

Alhaji Sambo commended Gov. Ugwuanyi for his hand of fellowship to the Muslim Community in the state in the spirit of sharing, national integration and unity, pointing out that the governor has established a peaceful atmosphere for all residents of Enugu State, irrespective of religious beliefs, tribe and political affiliations.

The Enugu Muslim Community leader urged other states to emulate Gov. Ugwuanyi’s exemplary leadership style, saying: “We are all from Adam and Eve, we are one, and in unity, without division in politics and religion, we will build a greater Nigeria”.

Alhaji Sambo added, “I want to say that this is not the first time Gov. Ugwuanyi is extending this kind of fellowship to the Muslim Community in Enugu State. The governor in his usual way normally sends things such as food items and what have you to us.

“On most occasions, Gov. Ugwuanyi visits in person. So, I want to say that we are highly delighted. Some of the significances of Eid-el-Kabir are sacrifice, unity, obedience and trust.

“I want to use this opportunity to say that the Muslim Community in Enugu State has strong trust in the leadership of His Excellency, Governor Ifeanyi Ugwuanyi.

“Our prayer for him is for Allah to elevate him to higher positions. As he remembered us today, we will continue to pray for him; we will put him, his administration and Enugu State in prayers tomorrow.

“We thank him (Ugwuanyi) for this peace that he has established in Enugu State. We also thank him for all he has been doing for the Muslim Community. We are highly grateful for this gesture”.