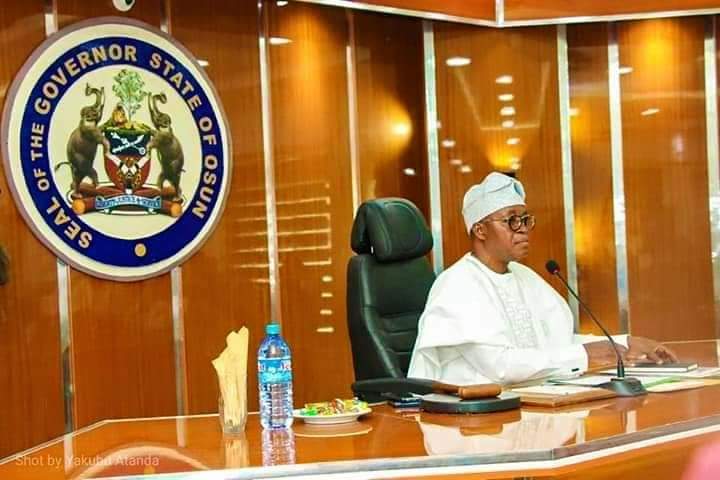 Opinions have continued to differ as residents of Osun are currently expressing worries over the affairs of the 68 local government and local council development areas being run by Council Managers, who are civil servants.

Some residents of the state described the council managers as strangers, who have no affinity with the people they are governing.

The Council Managers took over the affairs of the LGAs on Friday, February 6th, following the expiration of tenure of parliamentarians who were elected in December 2017 but assumed office in February 2018.

Council manager system was introduced by the adminstration of Ogbeni Rauf Aregbesola, the immediate past governor of the state, who allowed the civil servants to head the council for several months, despite the cries of Osun people.

Many believe that since Gboyega Oyetola has been right the wrongs of the past adminstration, the issue of Council Managers will also become a thing of past in the history of the state.

In 2020, Oyetola forwarded nominees of the Osun State Independent Electoral Commission, OSIEC, to State Assembly and they were screened and confirmed.

During the inauguration of the Commission, Oyetola gave them matching order to start mobilizing and commence processes leading to local government elections later that year (2020). The Commission complied as it reeled out procedures, asking political parties to come forward for registration.

All these process were commended by residents of the state, even the opposition People’s Democratic Party, which set up an internal Committee to assess its participation in the process.

However, things started falling through when the budget for the elections looked unrealistic as the whole process was put on hold.

Shortly after the reality of unrealistic LG election became visible, the APC members started mobilizing for Caretaker Committee. Interested individuals returned to their wards to show interest and obtained expression of interest forms, perhaps, amid controversy and rancour in some local government areas.

As the jostling for slots was ongoing, the State House of Assembly amended the local government administration law, most especially clauses that concern the caretaker.

Virtually every week, rumour filters into Osun social media space that the APC and the Government have perfected the list and would be released soon. Some APC members online would also be congratulating their colleagues tagged “incoming” on Facebook.

Osun LGAs/LCDAs as at today

The council managers have spent well over three months in saddle. For those three months, InsightMedia gathered that the only activities ongoing are being run from the Internally Generated Revenue as the state government has frozen all their accounts.

Payment of salaries is being done by the state government who has unfettered access to the councils’ accounts. No benefits to the masses.

A development expert and Executive Director of Kimpact Development Initiative, Mr Bukola Idowu while reacting to the development described the situation as compound complex.

He said the problem emanated from the lack of autonomy for local government councils, stating that Osun is one of the States where state government still takes charge of what happens at the local councils.

“Of course, it’s not their faults. It’s the deficiency in our laws that we’re advocating for. Which is autonomy of local governments. However, Osun’s case is now a compounded complex situation, because you have civil servants heading Councils. Definitely, there has been no development project ongoing in Osun State for the last three months.

“Now looking at it, the federal government has not stopped the local government allocation for the last three months. Who is supervising the spending of the allocation.”

Idowu insisted that only way out is to have the Independent National Electoral Commission to come down and conduct the local government elections.

Speaking with our Correspondent, a Government source ascribed the delay in the constitution of the Caretaker Committee to crisis on some local government areas.

The source said the Governor and the party are at the tail of resolving them, assuring the masses of constitution of the committee before the end of May.

“The problem is that there are issues to be resolved in some local government areas. Party leaders and members could not agree on best candidates and things like that are the main causes of the delay we are witnessing. But I can assure that the Governor and the party are done with that and before the end of this month, we’re going to constitute the Caretaker Committee. It’s not what we planned.

House is not on session due to PASAN strike – Speaker

When contacted on if the House of Assembly is worried that the law it passed, Kunle Alabi, the Chief Press Secretary to the speaker, Hon. Timothy Owoeye said the house has not sat for over a month now due to the strike embarked upon by members of Parliamentary Staff Association of Nigeria (PASAN).

When probed further on what happened in those two months before the house staff went on strike, Alabi said “it’s the duty of the executive to present names of the Caretaker Committee and not that of the house. So I think the executive should be asked that. However, we know how a search for qualified candidate can be, it may be tedious. So we can’t blame them too.

“I believe the moment the house resume plenary, the constitution will be done”.

Reacting to the development, the People’s Democratic Party in Osun State described it as a legalized illegality by the All Progressives Congress-led administration in Osun.

Spokesperson of the party, Areola Ayodeji who spoke with InsightMedia on phone express worry over the development.

“What’s happening today is an aberration of the norms and constitution of the Federal Republic of Nigeria. Local Governments are supposed be the closest Government to the people. But it has been turned upside down. In fact, it’s very provocative to the extreme. This is so because the Government of the day in Osun has legalized illegality.

“LGAs are supposed to be governed by the elected people who know the yearnings and aspirations of the people in their localities. But in a situation where you change the system as we’re witnessing now, you will this kind of results. Go to those LGA Secretariats, you will discover that most of them are like ghost towns. No activity going on.

“As a party, we believe that the people of Osun are not happy with this development and we stand with them. It wasn’t like this during the PDP time. People of Osun are living witnesses to how active the local councils were during the adminstration of Prince Olagunsoye Oyinlola. The present adminstration lee by Gboyega Oyetola has fazed out the third tier of Government.” Ayodeji concluded.

We can’t be stampeded into doing things wrongly – APC

The Director of Research and Publicity of the All Progressives Congress, Kunle Oyatomi said he can’t speak on when the matter be done, adding that the party will not stampeded into doing things that are not right.

Oyatomi, who said the constitution of the Caretaker Committee will be done at right time, directed our Correspondent to Taiwo Akeju, the Commissioner for Political Affairs in the State.

Speaking with our Correspondent, Commissioner for Political Affairs and Intergovernmental Relations, Hon Taiwo Akeju said the APC and the State Government are taking their time to ensure that we have credible persons and people with impeccable character at the helms of local government.

Akeju stated that the constitution will be done in few days,the list of the Caretaker Committee will be out.

“What we’re trying to do is to ensure that we put people of impeccable character and integrity at the helms of affairs. This why we have taken out time to examine people to be appointed.

“I can assure you that in the next few days, the list will be out and sent to the house of assembly.”