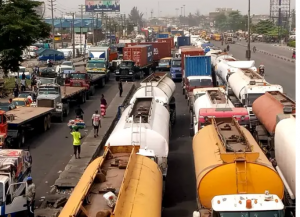 There is heavy traffic gridlock on the Lagos-Ibadan expressway on Monday, following heavy influx of vehicles occasioned by travellers exiting and entering Lagos for the global Sallah celebrations.

Tuesday and Wednesday has been declared as public holidays by Federal Government to observe the annual Eid- el Kabir by Muslims across the globe.

Eid al-Adha, Arabic for Festival of the Sacrifice, is one of the latter holidays celebrated among Muslims.

Muslim faithful often commemorates the day with the slaughtering of rams.

Most civil servants also seized the eve to travel out as the state Secretariat was a shadow of itself as workers, mostly junior did not turn up for work expected to be done on a half day duty.

Despite joint efforts by officials of the Federal Road Safety Corps, FRSC, and other agencies like the Ogun State Traffic Compliance and Enforcement Corps (TRACE), the building gridlock still stretched to Mobil Gas Station outbound Lagos and Mountain Top University for those moving in to Lagos.

Motorists got stranded along Lagos-Ibadan Expressway since the early hours to beat the anticipated usual gridlock commonly experienced during festivity periods, especially on the eve of such festival.

The situation was also compounded as a result of large buyers who stormed Kara Cattle Market around the long bridge, Lagos-Ogun border line, to shop for rams and cows for the Sallah celebration as well as various pockets of broken down vehicles.

Passengers were also stranded as transport operators hiked fares. Some passengers trekked long distances to get to their destinations

The popularly commercial motorcyclists, known as “Okada” riders were seen making brisk business commuting wiling and desperate passengers out of the traffic quagmire.

It was gathered that for instance, a ride from the Long Bridge to Berger that normally goes for N200 for each passenger was hiked to N500, while a ride from Mowe to Berger, rose from N500 to N1,000.

An officer of the FRSC, who did not want to be mentioned, said the situation is overwhelming due to activities of traders, Lorries and truck that brought rams from the North.

According to him, there was limited space for buyers to park in the market, considering the number of lorries and rams available for sale as well as the state of the market.

Also checks by Vanguard also showed large number of air travellers with families, who stormed Murtala Muhammed Local Airport, Ikeja, were seen in a rush to catch available flight to their various destinations.