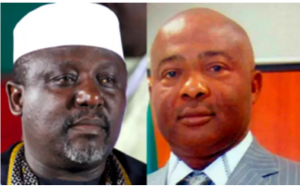 The Former Governor of Imo State and the Senator representing Imo West Senatorial District, Rochas Okorocha, yesterday dismissed the report that he has joined the Peoples Democratic Party, PDP.

Okorocha spoke in a statement to newsmen in Owerri through his Special Adviser on Media, Sam Onwuemedo, saying that the report of defection was to blackmail him out of his party, the All Progressives Congress, APC, by the Imo state government.

According to Okorocha, “Governor Hope Uzodinma can not and will not blackmail Senator Rochas Okorocha out of the All Progressives Congress, APC.

Governor Uzodinma was behind the fake story of Senator Rochas Okorocha leaving the APC for the PDP, last Monday.

“He had come up with the fake story of Okorocha leaving APC, because the National Secretariat of the Party had set up a reconciliation Committee. And also because of Okorocha’s visit to the National Office of the Party, with men and women who had sacrificed all they had, to make APC the Party to beat in Imo. And with National Assembly members who have the mandate of the people.

“Governor Uzodinma was never a member of APC.

He joined APC after he had been announced governor by the Supreme Court. The Supreme Court had given Judgement that the Candidate of APC in the 2019 governorship election was Uche Nwosu. Showing that, Chief Uzodinma was a gatecrasher in APC.”

“Yet, he does not want to be humble about that. He wants those who labored and blackmailed over APC to leave the party for him. There would not have been APC in Imo today, if Okorocha didn’t take the political risk he took to make Imo APC. Governor Uzodinma is reaping where he did not sow and one had expected him to be sober about that.

But he has continued to use blackmail to see how the party could be abandoned for him. At what point did Chief Uzodinma join APC,”Okorocha said.