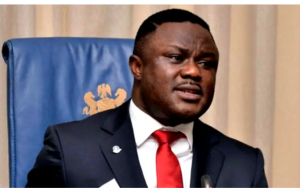 Cross River state Governor, Prof. Ben Ayade on Monday announced the ease of the curfew imposed on residents of the state.

Disclosing this in a statement, Mr Christian Ita, Special Adviser, Media and Publicity to the governor opined that the curfew which was 6am to 10pm will now be from 6am to 12 midnight.

The state reads: “Following a review of the security situation in the state, the state Governor, His Excellency, Sir Ben Ayade has ordered the immediate relaxation of the 6am to 10pm curfew in the state.

Consequently, restriction of movement is now between the hours of 12 midnight and 6am, with effect from today, Monday 2nd of August 2021.

“Members of the public can therefore go about their normal and lawful businesses between 6am and 12midnight,” he stated .

Recall that the curfew which has lasted for 10 months had crippled a lot of business and night life in that capital city.

Speaking with Vanguard, night business owners in Calabar lauded the move by the governor describing it as a welcome idea that would boost the economy of the state once again .

A shop owner at Etta Agbor ,Pascal Bajie said he was very happy about the development , stressing that once again Ayade has proved that he listens to the people.