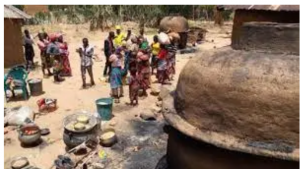 …We now beg to eat, clothe ourselves — Displaced victims speak out from IDP camp

THOUSANDS of people displaced in the recent attacks and sacking of several hamlets in Jebbu Miango, Irigwe chiefdoms of Bassa Local Government Area of Plateau State have appealed for help to enable them feed, clothe and provide shelter for themselves as the rains set in.

Women and girls need sanitary wares, while medical interventions are also needed to prevent outbreak of diseases. The sanitary conditions of the people camped in available spaces in the Miango and Kwall districts of the chiefdom require also immediate intervention.

When Arewa Voice visited the communities, the entire Jebbu Miango and other adjourning communities were deserted. At the ECWA, Bishara1, Miango and the palace of the Brra Nggwe Rigwe (Paramount Ruler of Irigwe), Ronku Aka where some of the displaced persons were seen, they appealed for urgent help from all people of goodwill, claiming that they had been abandoned by the government.

One of the victims, Martha Avia, said that she had been left with no shelter, food or accommodation after the latest devastating attack on her community and the burning of her home and means of livelihood. “We don’t even have the means to go home and where to lay our heads if we eventually find our way home because of the rising security threats along the way,” she said.

Monday Garba, Ward Head, Mararaba Tipper, Jebbu Miango, stated: “We want government to assist us, compel the security to act because all our farms are destroyed by Fulani herdsmen. Even in the night or afternoon, you see cattle grazing on our crops. This evil practice must stop.” Another victim, Monday Hodus, said: “They attacked and burnt down the whole Jebbu-Miango community killing many of its inhabitants in addition to destroying our farmlands.”

Gastro Barry, Chairman Relief and Intervention Committee, who narrated the series of attacks in the chiefdom since 2001 stated: “This year, 2021, it took an entirely different dimension. As I am talking to you now, about 39 communities have been displaced, over 700 have been killed with 55 people injured and hospitalized. The number of farmed crops destroyed is close to 3,000.

The number of residential rooms, exclusive of food barns, kitchens and stores destroyed is over 3,000. A lot of displaced persons are taking refuge in Miango and in Kwall district of the chiefdom. A few have moved to Jos and Bukuru. Because this thing happened so sudden, they could not move out foodstuff, clothing so families are struggling to feed. Some people sustained gunshot injuries and are in hospitals, bills need to be settled, they need medical attention. Issue of accommodation is also a challenge. We have not received any support from government. We pleaded with the clinics to bear with us.”

However, Rev. Gideon Para-Mallam, who led other officials of the Gideon and Funmi Para-Mallam Peace Foundation to see things for themselves and donate relief materials to the victims, said: “What happened in Irigwe land moved our heart.

Although we do peace work in this local government area but sometimes it is difficult to bring people to talk and then when it is an hour of need and you cannot provide the kind of help that people want. We reflected through that and said we should bring some support. There are many people that are displaced from their homes and they have no place to sleep, no food to eat.

“We brought rice, beans, maize, people gave through our Foundation, all the money didn’t come from our coffers. We call on other well-meaning Nigerians, we don’t need to wait for people outside to come and help us. We need to also give. When we give support, we give to all sides; I want to call on even Muslims to give so that we can support all of these people who have been rendered homeless. Our good act of mercy should not be defined by religion; I give this challenge to all Christians and Muslims to help. As at Thursday evening, we have 29,804 Irigwes that have been rendered homeless. That is almost 30,000; there are about 55 people injured and 70 people that have been killed.”

The Brra Nggwe Rigwe, Rev. Ronku Aka, lamented his people are being hunted everywhere like rats but assured there will be no reprisal because of their strong belief that God will avenge for the attacks on them.