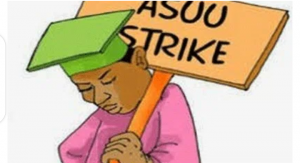 The Academic Staff Union of Universities (ASUU), University of Nigeria, Nsukka (UNN) chapter, has advised the Federal Government to take steps to avert another nationwide strike by the union.

The UNN chapter Chairman, Dr Christian Opata, gave the advice on Monday in an interview with the News Agency of Nigeria (NAN) in Nsukka.

Opata spoke against the backdrop of the recent threat by ASUU to resume the strike suspended on Dec. 24, 2020.

He described federal government’s failure to fulfill agreements entered with the union since 2009 as unfortunate.

He said that federal government would not be exonerated “if the union resumes another strike because of its inability to fulfill an agreement with it”.

The ASUU boss said the UNN chapter of the union was ready to enforce any directive of the national leadership of ASUU at any point in time.

In a similar vein, some residents of the university town also charged the federal government to redeem its agreement with the union to forestall the strike.

A community leader, Mr Innocent Ugwu, said the strike would cause another academic setback for students in public universities, should government allow ASUU to make good its threat.

Ugwu said, “Government should act fast and do everything within its capacity to redeem the agreement it entered with ASUU that led to the suspension of the strike on Dec. 24, 2020.

“This will prevent another strike that will paralyse academic activities in public universities in the country.”

He pleaded with ASUU to avoid another strike and continue to dialogue with government in the interest of students and parents, who were always on the receiving end.

According to Ezema, the quality of education determines the level of development.

“If government gives special attention to education, there will not be room for strike in public schools.

“Federal government should ensure that ASUU’s current threat to resume strike does not happen by fulfilling the agreement signed with the union in December 2020.

“If ASUU resumes another strike, the academic timetable in public universities will be disrupted again,” Ezema said.

A civil servant, Mr Desmond Ubah, said that incessant strikes in public universities led to a hike in school fees in private universities.

“Private universities are capitalising on incessant strikes in public institutions to increase their school fees arbitrarily.