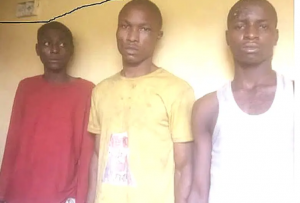 For some time now, residents in communities around Igberigbe area of Ikorodu Lagos, have been going through horrifying moments in the hands of men of the underworld who invade their homes unannounced.

Some of them resigned to fate by keeping a reasonable amount of money in the event of an invasion.

This is to avoid being beaten or even shot by the robbers, during operation.

Miffed by the continuous robbery operations, youths in the area decided to take the bull by the horn, by teaming up with some members of vigilante groups and the Police.

This action paid off as three suspected members of a robbery gang that stormed the community are cooling their heels in the custody of the Strike Team of the Lagos State Police Command, Ikeja.

The suspects stormed Igberigbe area of Ikorodu recently, where they carried out a house-to-house raid of two streets, dispossessing victims of cash, phones, jewellery and electrical appliances.

During the operation, the youths who were alerted raced to the scene and overpowered the gang.

Surprisingly, the leader of the gang, Segun Adeleke, disclosed during an interview with Crime Guard that they had never operated with a gun.

Rather, he revealed that “ We used banga during operation. We have operated at Igberigbe, three times. We would strike the banga which sound victims would assume to be gunshots. We operated between 12.30 am and 2.30 am.

“We don’t force doors open. Owners of the apartments open for us because we would threaten to shoot them if they acted otherwise.

“We don’t rape during operation too because we are not armed. In one of the rooms we entered, we saw a woman naked. I told her to put on her clothes but she said she was pregnant and was hot since there was no light. I collected three phones and jewellery from her.

“After operation, we would take the stolen items to Alakara Mushin, to sell. I sold one of the iPhones for N20,000.

In the course of the interaction with Adeleke, he disclosed that he was once arrested but escaped from Police custody.

Explaining how that was possible, he said, “ I was arrested with a toy gun by policemen at Victoria Island division.

“I had joined a robbery gang to steal items from a supermarket.

“On the day we were to be taken to court, the IPO brought me and other suspects out of the cell.

“He said he forgot something in the office and left to get it. I mixed with the crowd and escaped.

“I went straight to a ghetto in Akala, Mushin. You don’t have to pay for accommodation there. I slept on the streets. I met two other boys there, with whom I formed a new gang.

“This gang headed by me would leave Mushin for Igberigbe, to operate. At the last operation, youths chased us. I was lucky to escape.

“I rushed down to Mushin to hide, unknown to me that other members had been arrested. One of them brought the Police to arrest me”.

On his part, 21-year-old Quadri Adeniyi said his role in the operation was to stay outside and look out for any intruder.

He said, “I am a bus conductor. My job was to stand outside and alert members of any intruder, during operation. I also gathered all the phones collected from victims inside a bag”.

The third suspect, Abiola Fatai, 21, claimed that was his first time joining the gang for operation.

He said, “During the operation, I collected a Plasma television from one of the rooms. When the street boys came, we all tried to escape.

“I didn’t know the terrain because that was my first time joining them to rob. I ran into a street which led me to a dead end.

“My intention was to jump through a fence but I discovered that the Plasma television was heavy and slowed my pace. At the same time, I couldn’t throw it away”.

The suspects have been charged to court.