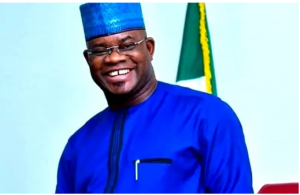 Coalition of Niger Delta ex-agitators in Delta State, Friday, told Governor Yahaya Bello of Kogi State to run for the presidency in the 2023 general elections.

Chairman of the Coalition, ‘Gen’. Joseph Figbele who stated this when Governor Yayaha Bello visited the group’s leadership in Warri, said the clamour for positive change in Nigeria would become a reality when capable young people are given the opportunity to lead in strategic positions of governance.

Noting that youths were already driving leadership in nations across the globe, he insisted that Nigeria should not be left behind in this regard.

Figbele described the Kogi State governor as one with “good track records,” announcing the group’s decision to give unflinching support to the presidential bid of Governor Yahaya Bello.

While urging him to openly declare his intentions, he said Governor Yahaya Bello has overtime built bridges among “persons of all ages, genders, religions, races, tribes and political institutions”.

He said; “we have resolved to tell Nigerians and the global communities that Alhaji Yahaya Bello, being the youngest and most youth friendly governor, is fit to lead Nigerians in 2023.

“There is no doubt that he will deliver in the areas of insecurity and will help to revive our economy if elected as the president of the Federal Republic of Nigeria in 2023. Hence, we assure him of our uncommon support.

“As the fifth largest ethnic group in Nigeria, we shall mobilize all our sons and daughters, particularly the ex-agitators and young persons in the Niger Delta region to come en masse and support him”.