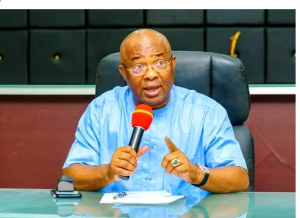 The Imo State Governor, Hope Uzodimma, on Saturday said nothing would stop him from the recovery of Imo properties forcefully converted to personal ownership by top political leaders in the state.

The Governor said this while interacting with a cross-section of Imo Stakeholders at Eze Imo Palace in Owerri, to thank them for the restoration of peace in the state.

The governor said he believed that by the time he leaves office, the same measure would be used on him should he indulge in stealing government properties. He said he would not be deterred in the recovery process of government and private individuals properties forcefully collected from them.

According to Uzodimma, “As I recover Imo properties converted to personal ownership by those who have political power, back to Imo people the same awaits me when I leave office. This is why I want to reiterate before you that I did not become governor to become richer than the state after my tenure but to serve you in truth and with fear of God. This been so, I will leave no stone unturned in my efforts to recover all Imo peoples stolen wealth.

In the last couple of weeks, recoveries have been made on stolen lands, buildings and assets which hitherto were fraudulently converted to personal use by the past administration.

“Among the recovered was the former Eastern Palm University now K. O. Mbadiwe University, you will also recall that insecurity was heightened in the state immediately we opened the White paper reports on lands.”

Present and former members of the National Assembly, Speakers of the Imo state House of Assembly, traditional rulers among others.