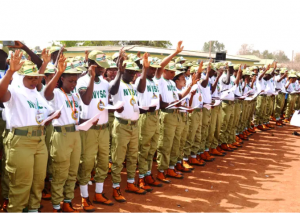 THE State Coordinator, National Youth Service Corps, NYSC, Mrs Bamai Mercy Dawuda, yesterday called on Corps members newly posted to the State to be security-conscious and report any strange or suspicious movement to the appropriate quarters without delay.

The NYSC boss in the State stated this during the induction of the 2021 Batch ‘B’ Stream ‘I’ Corps members at the NYSC Permanent Orientation Camp, Old MacGregor College, Afikpo North Local Government Area of Ebonyi State.

“Security is everybody’s business. Please be security conscious. When you suspect any strange move, please do not hesitate to report to appropriate quarters immediately.”

She commended the Chief Judge of the state, Hon. Justice Elvis Ngene, represented by Justice Iheanachor Patrick Chima who administered the oath of allegiance on the Corps Members, appreciating the presence of the NYSC Staff and its collaborating agencies with their positive contributions.

She further congratulated the new Corps Members and disclosed that a total of thousand five hundred and eighteen (1,518) Corps Members were deployed to the camp.

According to her, seven hundred and eighteen (718) of the Corps Members are male while eight hundred (800) of them are females, noting that they all went through registration exercise.

She also commended the Corps members’ conduct since their arrival in the camp especially on adopting the regimentation, stressing that, it showed their readiness for the service year ahead.

The State Coordinator reminded the Corps Members that the camp life is regimented and has been well packaged to instil discipline, resilience, hard work and total commitment which will enable them to tackle challenges of the service year in their various places of primary assignment.

Mrs Bamai had earlier commended the NYSC Director-General, Prof. Ibrahim Shuaibu for recently unveiled the nine books on the contributions of the scheme to national development.

She described the unveiling of the books as another demonstration by the Director-General’s obvious intention not only to showcase the relevance of NYSC but also to bequeath unprecedented legacies to the service Corps Members and the society at large.