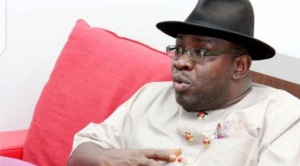 A former governor of Bayelsa State, Senator Henry Seriake Dickson, has said that the embattled Chairman of the opposition party, People’s Democratic Party, PDP, Uche Secondus was elected into the office and as such, can only be removed by the National Convention.

Insight Media reports that members of the party have been calling for the removal of the chairman following the crisis rocking the party.

Recall that the PDP House of Representatives Caucus, during the weekend, called for the removal of Secondus alleging that his style of leadership has given rise to intra-party alienation in several quarters.

Similarly, some protesters on Monday, stormed the party’s national secretariat in the Federal Capital Territory calling for his resignation.

But Dickson who is representing the Bayelsa West in the Senate, on Monday threw his weight behind the embattled chairman, holding that the calls were part of the plot to contrive a needless crisis in the party in order to set up a caretaker committee, which is illegal.

According to a statement he personally signed and made available to newsmen, Dickson rejected the call for Secondus’ removal.

He said, “The chairman is voted for and can only be removed by the National Convention unless on his own volition, he chooses to resign. So I call on all leaders of the party that this is perhaps their last effort to save the PDP.

“Like me, most of us have paid dearly and have paid our dues since 2015 when we lost the Presidential elections, and like me, we should all not rest on our oars or leave any stone unturned in the bid to strengthen and reposition the party including calling people to order and standing up against illegality when we have to.

“We don’t have any crisis in the party. What is happening is only a contrived media crisis orchestrated and funded by some people with a motive to hijack the party without subjecting themselves and their cronies to a democratic vote at the convention which is due in less than 4 months.”