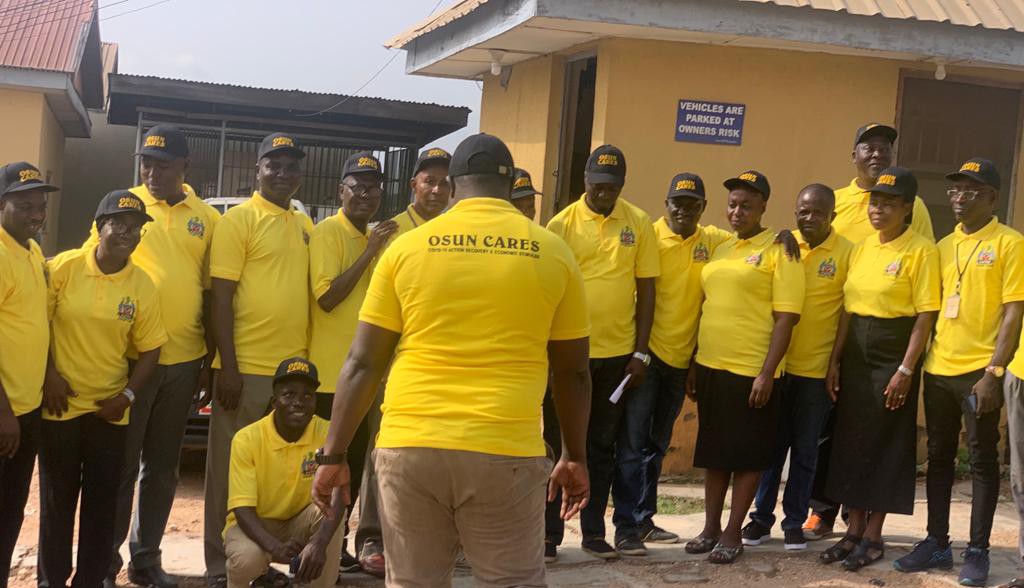 The General Manager of the Osun State Community and Social Development Agency, Mrs Funmi Abokede has stated that the local government administrators are integral to the achievements of objectives of the COVID-19 Action Recovery and Economic Stimulus (Osun-CARES),  project, a domesticated version of the Nigeria COVID-19 Action Recovery and Economic Stimulus (N-CARES).

Abokede said this on Thursday during the training programme for management of local governments in the State. The CSDA is handling three areas of the project  under Delivery Link Intervention (DLI).

The training which centered on effective management of the project, most especially as it concerns people at the grassroots, was  held in Osogbo, the State capital. It had in attendance the Local Government Chairmen in Osun state.

They were taken through different sessions that will aid the implementation in the local communities.

Speaking with InsightMedia, the General manager of Osun CSDA,  Mrs Funmi Abokede said Osun State COVID-19 Action Recovery and Economic Stimulus (OSUN-CARES) is a response to COVID-19 pandemic and her agency is working on the implementation of DLI 1.4 which consists of health, education and water and sanitation. The programme is co-funded by the Osun State Government and the World Bank.

She added that programme is used to promote human capital development of the poor and vulnerable people at the grassroots level.

Abokede said, “the programme cannot be done without the involvement of the local government administrators, being the third tier of the Government and the closest government to the people at the grassroots”.

She said the funding for the intervention is from the state government and World Bank. “We are grateful to the state governor, Mr Gboyega Oyetola, for making it possible for us to be part of those that will implement the Osun-CARES.

“Without the local government involvement in the programme, we can’t go far because local government is the third tier of government and closest to the people, so there is need for them to know what is happening and to give support to the communities. It’s not just about project alone, the project must be functional.

“This seminar is like creating awareness for them to be responsible and responsive to their responsibilities in their various local government.” she said.

The CSDA boss commended and appreciated Governor Adegboyega Oyetola for giving the agency the required support to make the project a reality.

One of Guest speaker at the event, Mr Joel Adedokun talked on Social Inclusiveness and Gender mainstream. He explained that “gender mainstreaming as an approach to policy making that takes both women’s and men’s interest and concerns while social inclusion is the process of improving participation in the society”.

Mr Adedokun advised the stakeholder to use gender lens, so that they would be able to see beyond. He urged them to ensure they put an end discrimination against both women and people living with disability.

“Stakeholders should carry everyone in their Local Government along irrespective of their gender”. He concluded.

Some of the participants who spoke with InsightMedia appreciated the impacts of the seminar. They expressed their readiness to partner with the agency towards the attainment of the set goals of the project.

“They programme has been so fantastic and we shall be working on it with the CSDA together in our local government. What we were taught here are so interesting and eye-opening and I’ll believe our people are going to benefit from it massively,” said a council secretary.