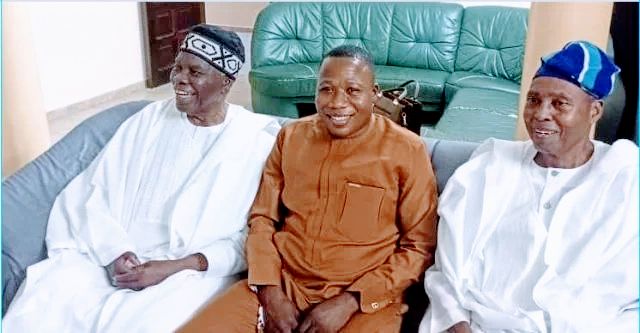 Yoruba Nation agitator, Chief Sunday Adeyemo, also known as Sunday Igboho, and leader of the Ilana Omo Oodua, Professor Banji Akintoye, have hinted of returning to Nigeria soon to continue their agitation, dismissing reports that they have abandoned the succession movement.

Igboho and Akintoye gave the hint during an interactive session with with selected journalists who visited them in Cotonou, Benin Republic.

When probed to speak on his ordeal and how he escaped from Nigeria when operatives of the Department of State Service, DSS, invaded his Soka residence in Ibadan, Igboho declined but promised to speak at the appropriate time.

The Yoruba activist, who was in high spirit during the interaction took pictures with the journalists that visited him.

During the session, he spoke in Yoruba about his struggle and how he intends to see to the actualization of the Yoruba Nation.

The agitator fled Nigeria when operatives of the DSS stormed his residence, killed some of his aides and arrested many others.

He was, however, arrested at the Benin Republic international airport and detained in a Cotonou prison over immigration-related offences.

His words: “I don’t want to say much for some obvious reasons but I am coming back to Nigeria very soon and it is going to be a grand entry”.

On his house invasion, he said: “I will give full details of how I escaped from my house during the invasion. The DSS operatives wanted to kill me, they did not come to kill me.

They destroyed all my properties. I walked past them during the invasion and I cursed them. I have never seen a day like that in my life. If say anything now, it will no longer be useful. For now, I want to be silent on that until the appropriate time. As far as I am concerned, the Yoruba Nation self-determination struggle continues. There is no going back; no retreat, no surrender. But I want the world to know that I will be back to Nigeria soon, my return is not far.”

Speaking on his case before the Court of Appeal, Igboho said he believes in the judiciary to do the right thing irrespective of whose ox is gored.

“I believe in the sanctity of the judiciary that it will give judgement in my favour. I am optimistic that the Court of Appeal verdict will be my favour”, he said.

Our lives constantly under threat, says Akintoye
Speaking in the same vein, Akintoye said he will return to Nigeria soon but failed to give a specific date.

The leader of Ilana Omo Oodua said: “Don’t ask me detailed questions, those are security matters. Sunday Igboho will return to Nigeria and I am coming back too. How and when, I cannot tell.”

He, however, disclosed that the Fedeal Government has planted moles to infiltrate the self-determination struggle.

He said: “There are people among us who are working for the Federal Government; they are not part of the movement. They are pretending to be part of the movement. They are moles and they are working for the Federal Government and their objective is to irritate me out of the struggle.
“If you want to fight for a struggle, know the intricacies from day one and be ready for it.
“For me and for the rest of my life, the most important thing is the struggle. I do not need money. If they approach me with N100 billion, what will I use it for? How much longer do I have to live in this world that will make me mess myself up?”

Speaking on his safety and other in the struggle, he disclosed that he and his deputy, Professor Wale Adeniran, are being trailed by security operatives.

“This is our 7th abode in Benin Republic. We do not discountenance information. Some weeks ago, we had to sleep outside our house after inaugurating the Yoruba National Front.

Just last night, we got information that about seven people were sent from Nigeria with power bikes to an obscure border entry into Benin Republic. That is our situation.” (Culled from Vanguard)