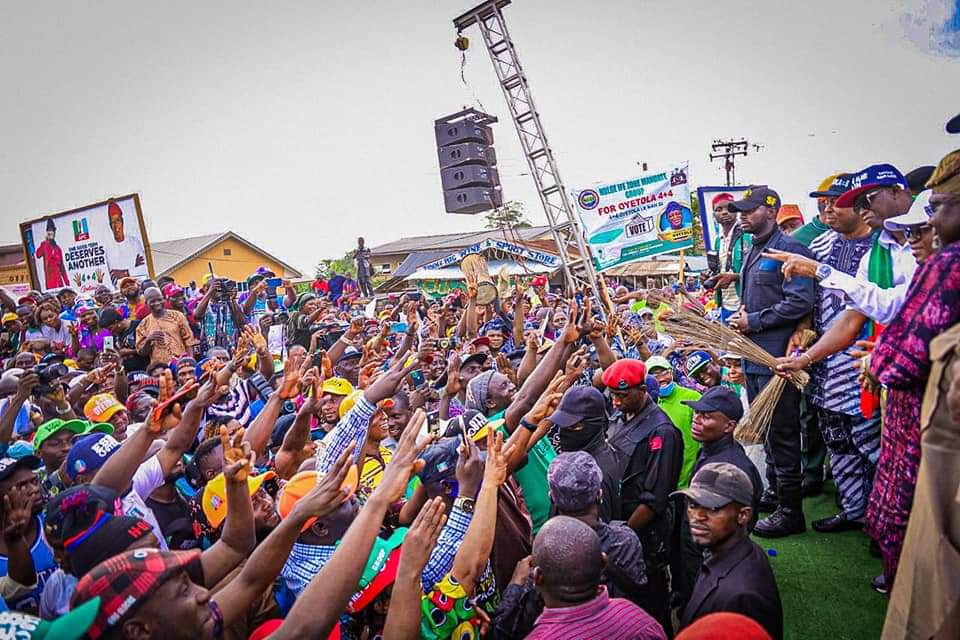 As 2022 election in Osun State is less than two months away, Governor Adegboyega Oyetola on Thursday flagged off his reelection campaign in Ile-Ife.

Oyetola, who first paid homage to the Ooni of Ife, Oba Enitan Adeyeye Ogunwusi at his palace, told the first class Yoruba traditional ruler that he has no money to buy private jet for the monarch neither does he have dollars to buy Osun people but he has capacity to lead the State to prosperity.

He added that because he is a man of peace and believer in the fact that politics is not do-or-die affair, he is not interested in fire-for-fire approach espoused by a certain governorship aspirant.

“I am happy that the Ooni knows that I have good intention to govern this State. I may not be able to buy private jets, but I have all it takes to fix Osun. I don’t have hard currencies to splash around and I don’t believe in fire-for-fire approach, but I am confident of victory in the next governorship election because of the modest achievements of our administration and the wide acceptance from our people in the last three-and-a-half years.

“What we have done across sectors is evident for people to see. We have proved to our people that Osun is in safe hands in view of the equitable distribution of resources that had culminated into the development that our people have been witnessing in the nooks and crannies of the state.

“As you all know, a State like Osun is too sophisticated for kindergarten politicians to govern. It is costly to allow such people experiment with Osun.

“In view of the way we have been managing the meagre resources at our disposal, coupled with the attendant challenges that we have successfully surmounted since assumption of office, it is instructive for discerning minds to know that governance is a serious task that cannot be left in the hands of mediocres,” he said.

READ ALSO: Hon. Lasun and his warped knowledge of Economy, By Ismail Omipidan

Reacting to the governor’s comment, Oba Ogunwusi said Oyetola’s performance has justified the mandate given to him by the people of Osun in 2018, adding Oyetola has touched every sector.

Praising the Governor, Oba Ogunwusi described Oyetola as a brilliant, intelligent and calculated leader who has shown capacity to govern a State like Osun.

“We thank the governor for doing so much great works with less noise. Quietly but steadily, he has set the state in a progressive path.

“You are doing excellently well, and we pray God Almighty to continue to support your quest to see Osun develop. It is indeed true that your first term had brought so many goodies to citizens and we pray God to grant your desire to serve the State for second term”, Ooni said.

Addressing the thousands of supporters who have gathered to welcome him to Ile-Ife, Oyetola advised them to go and collect the permanent voter card.

He reeled out his achievements in the last three years, promising to consolidate on his them if elected.

“We will stop at nothing to ensure that dividends of democracy are equitably spread across the nooks and crannies of the State, just as we have spread our health and infrastructure interventions around, among many other interventions”, Oyetola added.

Earlier, the All Progressives Congress National Secretary, Iyiola Omisore who is from Ile-Ife, showered praises on the administration of Oyetola. He called on Ife people to reciprocate the gesture of the Governor.

According to him: “Ife is regarded as our source and that is why we are flagging off our Party’s campaign from Ife. If we have been trusted that much and regarded as deserving of this honour, we must not disappoint. We must show appreciation, not just for this gesture but for other good fortunes Governor Oyetola has brought to Ife.

Others who spoke at the rally are Ajibola Basiru, the campaign director-general; Gboyega Famodun, APC State Chairman and other party leaders. Leaders of Hausa, Igbo, Ebira communities took turns to appreciate and express their readiness to support the Governor for another term.