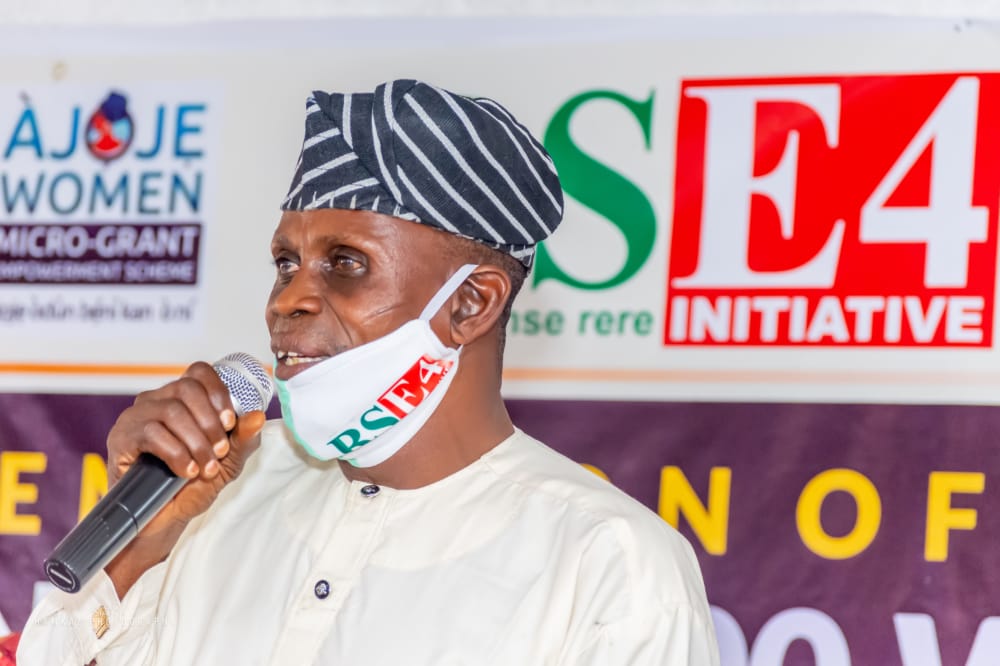 The Osun State Chairman of the People’s Democratic Party, Elder Sunday Akanfe Atidade has called on the members of the party to remain calm in view of the latest development in the party.

Insightmedia on Tuesday reported that the National Working Committee of the PDP ratified the removal of Adagunodo and ordered Atidade to take over.

Atidade during a press conference in Osogbo, the state capital on Wednesday said the removal of Adagunodo has no iota of crisis or hatred for the person of the former Chairman, describing it as a bridge of necessity that members of the party must cross.

He called on the party members to remain calm as the party is set for repositioning towards the 2022 Governorship Election in the state.

I want to use the opportunity of this special day to appeal to our teeming party members of Osun PDP, supporters and members of the public to remain calm in the face of the latest development in our party, as our former chairman, Hon, Soji Adagunodo’s removal from office was on Tuesday, officially ratified by the National Working Committee of the party according to the laws governing the party and as demanded by members of the State Executive Comitteee of the party. The development was a new bridge of necessity that we needed to cross as a party in dire need of repositioning for the onerous task of rescuing Osun State and handing it over to the people of the state.

“The removal of the former chairman from office, I want to re-emphasize, has no coloration of crisis in the party or hatred against the person of Hon Soji Adagunodo as being insinuated in certain quarters, but a necessary routine in administration of a big political family like the PDP. It is not uncommon that a serious minded political organization would take stock of events in its fold periodically and map out new administrative strategies as basement for subsequent activities towards collective aspiration of the populace.

“The PDP in Osun State, no doubt, is not unaware of the enormous and high wired expectations of residents of the state placed on our shoulders and we are also poised to deliver the goods of such expectations. We know we cannot afford to operate in an atmosphere of lack of trust and energy. We cannot operate on a pedestal of a zealless captain in a ship on the high sea of a rescue mission. It was in the light of this that members of the state executive council realized the need to take the bull by the horn as people with constitutional seal and gavel, to redistribute responsibilities with renewed vigour. ”

While admitting that some supporters of Adagunodo may feel aggrieved over the development, Atidade called on party leaders to wade in and persuade the aggrieved members, stating that the party under him will be fair to everyone.

“However, I am also not oblivious to the fact that some nerves tend to flare at times like this. I therefore urge our founding fathers, leaders and members of the party to take a deep breath and look at Osun State in our actions, inactions or reactions as we move forward. Let us take into accounts as natives of this land, the very sorry state of our dear state. A State where our fathers and mothers in the class of pensioners are being buried like plagued fowls on daily basis owing to the inhuman activities of APC and its political agents in the state. The pensioners for instance, amongst several other suffering classes of people in the state, are those that have served Osun State with the most productive stages of their lives but are now being treated by APC administration as beggars in their own land. Nothing could be more unfortunate!

“I urge us to examine the hell red financial books of the state with bundles of indebtedness and corresponding bundles of abandoned projects the debts were made to achieve for our dear state. Let us look at our towns and villages in the state, in roads and other infrastructures and ask ourselves, how much pride can we exude on them as sons and daughters of the land, taking the yet to be explained loans into cognisance?

“We have heard of first of its kind airport, we have heard of the “Ona to le tiroo” from Gbongan to Kwara, we have heard of flyovers in the sky, all laid out to be executed by loans obtained on behalf of born and unborn generations of Osun State. Yet, none of these has been delivered as dividend of the accessed credit facilities, while the state continues to make refunds in billions of naira every month.

“Looking at these inhuman infractions by these APC buccaneers, whom we are all aware, lack the umbilical cord of empathy to refrain from their unclad raping of the state, one would come to realization of seeing nothing as too much as sacrifice just as we saw with stakeholders in other States where it became expedient for PDP as the only rescue alternative.

“We cannot afford to fail our state, we cannot afford to abandon Osun in the hands of acrimonious tricksters, who have failed to prove their acclaimed encyclopedia worth of wealth but instead drilling the state into the lagoon of insolvency. It is our duty to take back our state for the good of our people and in the spirit of posterity. No sacrifice at this time can be too much.”