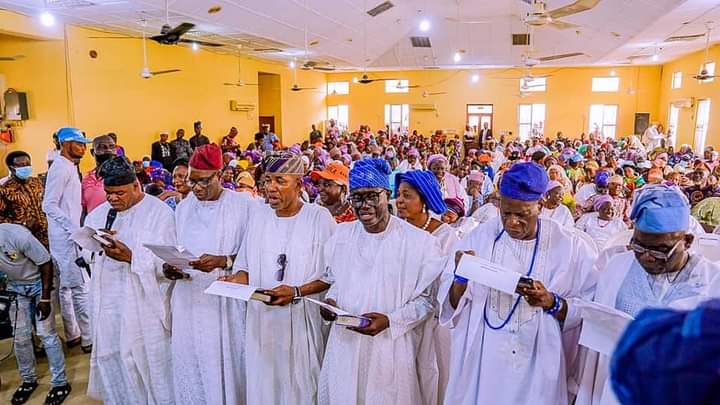 The Governor of Osun, Adegboyega Oyetola, on Thursday, inaugurated chairman and members of Osun House of Assembly Service Commission.

He reiterated his Administration’s commitment to strengthening the existing bond of unity, love and togetherness between the three arms of government in the State.

Inaugurating the board members at the Local Government Service Commission, Government Secretariat, Abere, Osogbo, Governor Oyetola, said the appointment of new members to man the Commission, was aimed to further entrench the ties between the executive and legislative arms of government in the State.

The Governor noted that the executive under his watch, had enjoyed unparallel cooperation with the other two arms of government in the State, with each working dutifully to fulfill its constitutional mandates without undue interference.

According to him, the result of this is that government is able to offer exceptional service delivery to the people without undue distraction.

He said: “In the House of Assembly, we have found a worthy ally that is aptly supportive of our Administration’s commitment to building a robust economy that is alive to improving the quality of lives of our teeming citizens and sustainable development.

“We are, therefore, expectant that with your appointment and working with the leadership and members of the House, you shall further strengthen institutional structures of the Assembly and make them fully supportive of the onerous legislative functions of our distinguished legislators.

“I have no doubt whatsoever that you will succeed in this endeavour and make the Osun State House of Assembly a model of excellence.”

The Governor tasked the newly inaugurated board members to discharge their duties with the fear of God, integrity and high sense of diligence as the State is expectant of much coming from them.

Speaking on behalf of other members, the Chairman of the Board, Hon. Abiodun Awolola, promised that they would serve the State to the best of their abilities and wisdom.

“It is a privilege to be appointed and given the opportunity to serve at this capacity. We thank Mr Governor for the confidence reposed in us to serve the State. We equally thank Mr Speaker for giving us room to work together as members of the State House of Assembly Service Commission.

“We are giving you the assurance that we will not let you down and we are ready to bring our experiences to bear to move the State forward in general and the House of Assembly in particular. We will continue to align with your policies and programmes designed to uplift the State and bring democratic dividends to the people of Osun.

“We are resolute to continue to support your administration to actualise its dreams. We have the assurance that we will not have the difficulties in carrying out the assignment because we are pleased in your administrative prowess, as a workers-friendly Governor”, he added.