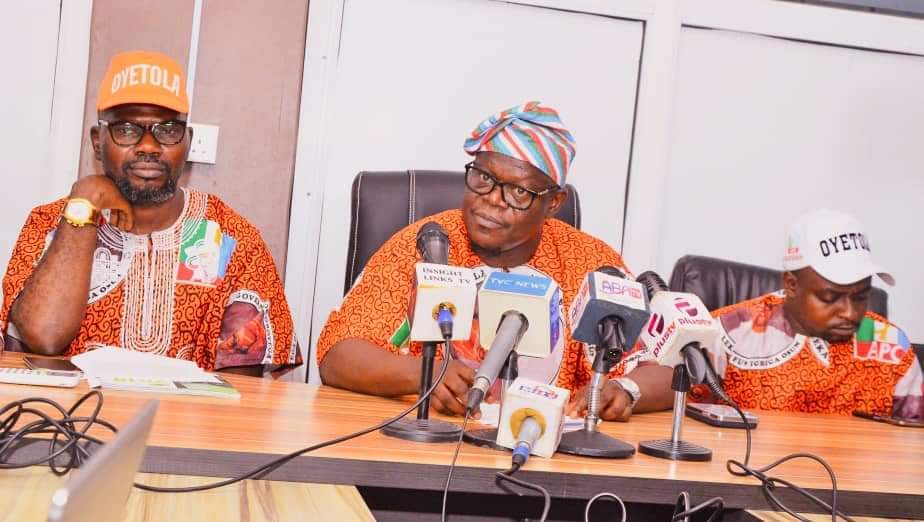 The Osun State chapter of the All Progressives Congress has reacted to the allegations made by the opposition People’s Democratic Party, calling on security agents to caution Senator Ademola Adeleke and his party.

The Director General of Adegboyega Oyetola Campaign council, Senator Ajibola Basiru on Monday evening, during a press briefing in Osogbo called on the Economic and Financial Crimes Commission to immediately invoke an investigation into the alleged voters inducement by the PDP candidates.

The APC also said it is a law-abiding and peace-loving Party that will not resort to any form of violence. He recalled some of the violent attacks on the party’s loyalists in the recent times.

Basiru said it has become imperative to intimate the general public with the clandestine move by the opposition Peoples Democratic Party, PDP, to kill, maim and harass leading figures in the Osun Government and the All Progressives Congress, APC, using political thugs, and then turn round to accuse the APC, its government and sympathisers as the brain behind the wicked act.

“You will recall that on Friday, May 16, 2022, the candidate of the party, Sen. Jackson Ademola Adeleke, at a rally in Osogbo, publicly proclaimed, among other things, that he had arrived with Pounds Sterling, Dollars and other hard currencies to bribe the good people of Osun in the days leading to the election and on the election day. He went further to say that this time around, he would unleash violence and terror on the State. He insisted that this time around, it is “Fire-for-Fire.”

“We promptly reacted by cautioning him and letting him know that Osun people are not commodities waiting to be purchased off the shelf of any supermarket. These exchanges are well documented by both the conventional and digital media. We had thought he would heed our advice to play by the rule and call off the demons he intended to unleash on our people. But alas, a leopard will never change its spot.

“In the early hours of June 9, 2022, we got an intelligence that a certain known political thug in the State, by the name Olamilekan Oyeyemi Ajagungbade, otherwise known as ‘Emir’, had been contracted by the PDP to carry out the destruction as part of the conditions to sign him on for further destructive operations in the State ahead of the elections.

“And by the next day, the destruction began. By Sunday, June 12, 2022, Emir moved to the PDP secretariat to dislodge another set of hoodlums that had been working for the PDP before his arrival. This led to a shootout between the two groups, as guns, machetes and other dangerous weapons were freely used. Again, we have video documentary evidence of what transpired. In the end, several other passers-by, including some visiting investigative journalists, who were in Osun for an assignment, fell victim of the attack”, he said.

The Senator also recalled that the said political thug, Emir last week launched an attack on the life of The Amotekun Field Commander, Comrade Amitolu Shittu by shooting at his private residence in Osogbo.

He called on the EFCC and other anti-graft agencies to beam their search light on the matter and summon the PDP candidate in the state for a thorough investigation and questioning to unravel what he meant that he has brought pounds, dollars, euros and other hard currencies to buy vote.

“I expected the EFCC to have invited Senator Ademola Adeleke to give account of what he meant by coming to the state with hard currencies for the Osun State guber election.

“Certainly, inducement of voters is a great offence. So, for Senator Adeleke to manifestly declare an intention to induce voters, it warrants criminal investigation by EFCC.

“EFCC should summon him for investigation for questioning by what he meant that he has brought pounds, dollars, euros and other hard currencies to buy vote.

“That clearly is a manifest intention to commit the offence of inducement of voters which is clearly an electoral offence under the Nigerian law”, Basiru added.