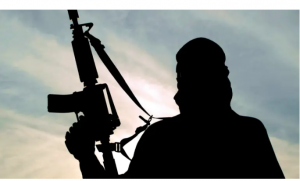 The incident disrupted the baby dedication service as members fled in different directions for safety.

The deceased was identified as Pastor Bolanle Ibrahim.

Eyewitnesses explained that when the assailants stormed the church, they made straight for the pulpit where Ibrahim, an Assistant Pastor, was praying for mothers and their children who were brought for dedication.

Eyewitnesses further stated that the assailants pulled him down from the pulpit and were dragging him out of the church, while the pastor kept asking what the matter was.

Another pastor was said to have approached the invaders and demanded to know what offence his colleague had committed to having warranted such embarrassment in the house of God.

Rather than respond, they reportedly hit their victim with the butt of the gun and shot him dead. The assailants were said to have threatened to shoot anyone who dared to come near them.

Members of the church described the killing as a clear case of assassination. They disclosed that before the gunmen shot Ibrahim, they showed him a picture to confirm he was the one.

One of their members, who simply gave his name as Magnus, said: “Pastor Bolanle begged them not to kill him. He kept asking who they were and what their mission was. He asked if they were policemen and begged to be taken to the station.

“One of the pastors, who came to ask them who they were, was hit with the butt of the gun in the mouth. They fired a warning shot before leaving.”

We’ve clue into the killing —Police

Spokesman for the Lagos State Police Command, Olumuyiwa Adejobi, who confirmed the attack, said the command had a clue into the killing and had begun an investigation.

He said: “A man was attacked during church service. The assailants went for him in the church. We are investigating the case because we have a clue into the killing.